We woke up to another overcast day, but with light rain. After unsuccessfully checking the televised news for any hint of Canadian Olympic results, we headed out for more exploring. This time we headed away from the castle, eventually finding ourselves at St. Canice’s Cathedral. It was built in the 13th century, but the site has been used for Catholic worship since the 6th century. It’s a massive old cathedral, and many of the glass panes are now basically opaque. The cathedral is also surrounded on 3 sides by very old tombstones and monuments. Most far too faded to be legible. 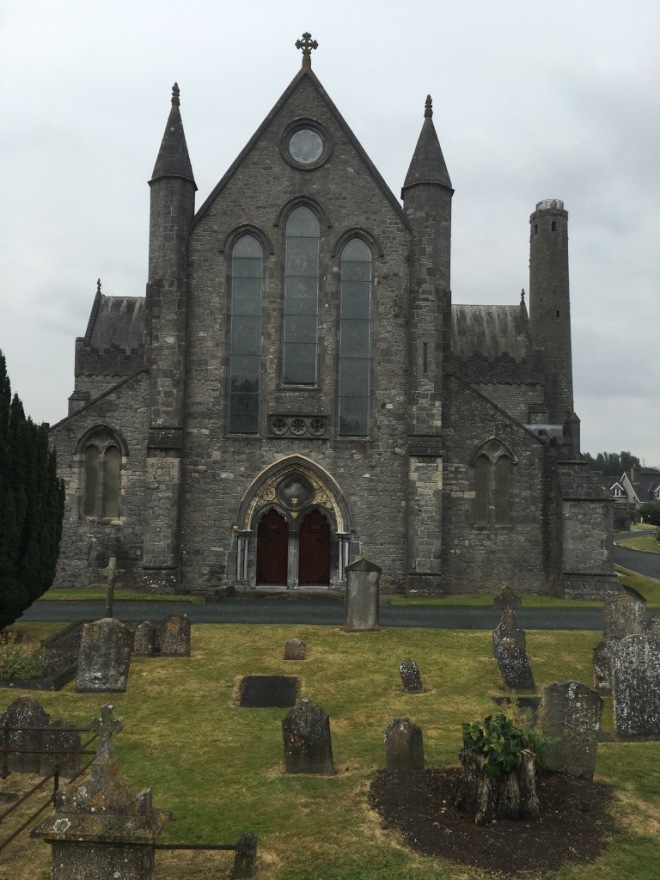 However, it was the 100-foot tall 9th century Celtic Christian round tower that grabbed our attention. It’s a narrow tower with a shallow foundation and a slight leaning to one side. AND IT CAN BE CLIMBED! 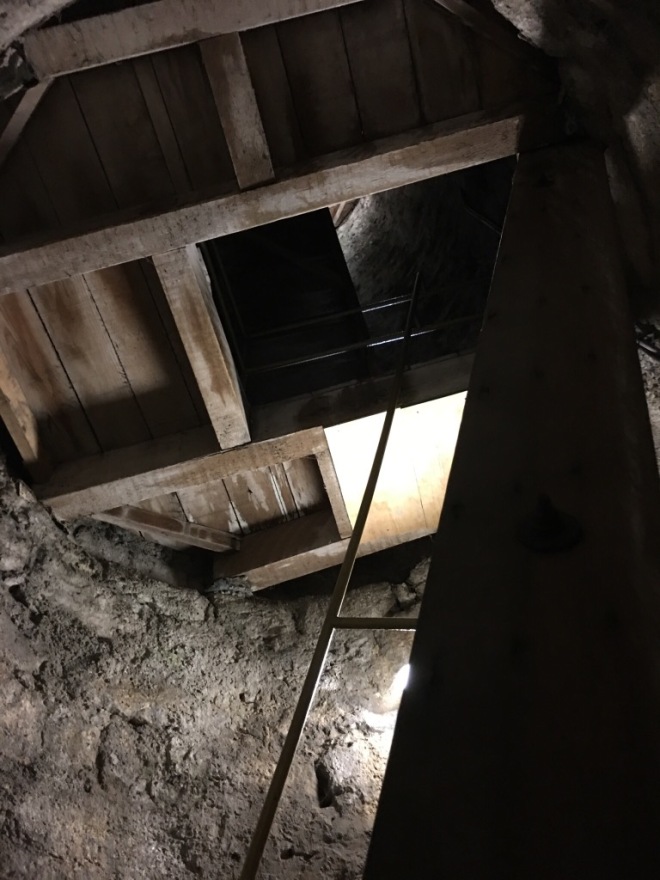 Somehow I forgot to take a picture of it. But you can see a file pic here.

The climbing is all inside the very thick walled tower, where the widest space inside is maybe 5-6 feet across  at the bottom. This means the wooden ladders are almost vertical, and the landings are very narrow. In fact you have to kind of twist off to the side to get onto each landing. By the upper levels it was probably 4 feet or so wide. And when you get to about 7 feet from the open roof, you go up 5 well worn, very narrow and very wet rock steps. It was fun, and the resulting view was magnificent (panorama pic at top of post). The view even makes the castle look tiny. Those early Christians were smart!

We then wandered back to the hotel, checked out, and headed to the Dublin airport. It was about a 2 hour drive, in a light rain. In other words, quite boring.

The only odd aspect to the flight involved boarding. We had a gate that lead to a bus that took us to the plane. Nothing unusual there. But they made numerous announcements that it was very important that rows 1 to 10 board first. So rows 1 to 10 got on the bus first, and they naturally took the bus seats. And so when the rest of us got in the bus, we stood, close to the exits. They made another announcement on the bus that rows 1 to 10 had to board first. The bus stopped and of course rows 1 to 10 were last to get off because they were seated. Now we couldn’t tell who was in rows 1 to 1, so we all just lined and got on.   Very strange.

The rest of the day was uneventful. Landed, taxi, hotel, eat, walk about 5 km looking for Scottish Pokemon, then sleep.
But as a teaser, tomorrow wasn’t boring at all.

Here's my life in a nutshell. Husband to a beautiful wife Father of 3 amazing, grown-up children. Electrical Engineer (hey, it pays the bills and keeps my mind busy) Swim coach (this is where my passion lies) Attributes: Ridiculously curious. Introverted. Pretensions of creative abilities. Reader (books not minds. at least, not that you know). Athlete (reduced primarily to swimming and cycling now). Collector (of weird, old and interesting items). Writer (primarily of boring technical reports and overly long About You blurbs) View all posts by Rick Madge